With all the other changes you’ve had to deal with over the past few years, you could be forgiven for not being aware of the changes happening with wireless networking. Most people don’t really think about their wireless network until it’s not working. If yours has been working fine for the past few years, you haven’t really needed to think about it. Until now.

Most business Wi-Fi networks were installed before the pandemic when video conferencing, Zoom calls, and other collaboration tools were a small percentage of network traffic. When pandemic restrictions accelerated the adoption of these high-bandwidth tools, many employees were working from home, so the office wireless network wasn’t being used much. With employees returning to the office and still using video conferencing and other tools, the amount of data your Wi-Fi network has to support is going up significantly. If you haven’t thought about the impact of that yet, poor performance and user complaints could force you to think about it soon.

Fortunately, over the past two years, the industry has been quietly rolling out the next generation of Wi-Fi. The timing couldn’t have been better.

Wi-Fi 6 began deployment last year and added new features to the existing 2.4 and 5 GHz bands. Wi-Fi 6E is rolling out in 2022 and incorporates all the benefits of Wi-Fi 6 along with an additional 6 GHz band we will discuss shortly. (For simplicity the rest of the blog will refer to Wi-Fi 6E since that’s what we think most businesses should deploy).

Wi-Fi 6E addresses three key areas that will be of interest to most businesses:

Video conferencing and other collaboration tools use a lot more bandwidth than email and voice calls, so bandwidth usage is increasing.

Wi-Fi on the 2.4 GHz band only has room for three non-overlapping 20-MHz channels. (There are 14 actual channels, but many overlap, so effectively there are only three that can be used without interfering with each other). While that may be adequate for one employee at home, once you have a few dozen employees in the office trying to share that bandwidth, you’ll likely run into problems.

The specification even foresaw the need for higher bandwidth and allows 40 MHz channels to be combined to create six 80 MHz channels. Six channels are just enough to allow for broad deployment in an office building with many access points throughout the building that don’t interfere with each other. The problem is that an 80 MHz channel can’t reach gigabit speeds, and for many companies, the ideal wireless solution would offer gigabit-speed just like a wired Ethernet connection.

Wi-Fi even allows for the creation of 160 MHz channels that do deliver gigabit speeds, but the 5 GHz band only has room for three of these gigabit channels, which isn’t enough to allow for broad deployment in an office building.

Wi-Fi 6E, in addition to supporting 2.4 and 5 GHz bands, adds support for a new 6 GHz band. This 6 GHz band allows seven 160 GHz “gigabit” channels, in addition to the three available on 5 GHz. That’s 10 non-interfering gigabit channels – which means businesses of all sizes can deploy gigabit wireless with great coverage and bandwidth.

PCs are already shipping with Wi-Fi 6E radios, and commercial access point makers have begun rolling out new 6E products.  You’ll need 6E on both the access point and the device to use the 6GHz band. If your old Wi-Fi network is beginning to struggle to handle the increased bandwidth of your users, you’ll want to look at upgrading to a new Wi-Fi 6E network soon.

While Wi-Fi networks allow many users to connect to an access point, only one user can transmit at a time. The network needs to coordinate when each device can transmit and the others need to avoid transmitting during this time to avoid interference. When two devices transmit at the same time, this causes a collision that requires the data to be retransmitted, which slows the network.

As your employees return to the office with all their devices looking to use Wi-Fi, you might find your legacy network that worked fine before the pandemic isn’t able to keep up now. If our legacy Wi-Fi networks only had a few devices, we could probably get by with the wireless equivalent of a stop sign. But we now have PCs, phones, tablets, smartwatches, thermostats, printers, and hundreds of other Wi-Fi devices trying to communicate.

Wi-Fi 6E adds the equivalent of a stop light. New algorithms help devices take turns transmitting with fewer collisions, and when there is a collision, it is more efficient at recovering. The result is a network that can handle up to four times as many devices per access point. This is critical in office environments where you may have employees congregating in one area, such as a conference room, and consequently more employees than normal using the same access point. 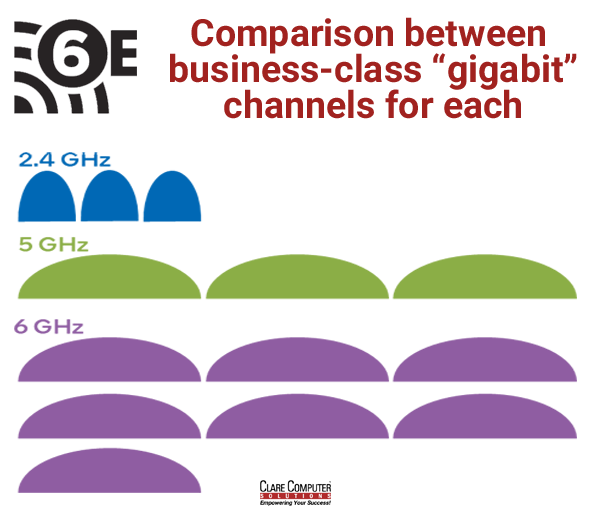 We know security is important on wireless networks. The first version of the wireless security, WEP, was found to have serious vulnerabilities shortly after launch, which led to the creation of the WPA security standard. That was upgraded in 2004 to WPA2, which you’re still using today.

Think about that for a minute. The authentication and encryption technology that prevents unauthorized users from accessing your network is 18 years old. The good news is that the WPA2 standard is still protecting you. The bad news is that its time is running out. With the exponential increase in computing power over the past 18 years, attacks that would have taken decades can now be done in weeks. Soon that will be hours.

Wi-Fi 6E addresses this by introducing the next generation of wireless security: WPA3. This new security standard increases encryption from 128-bits to 192-bits, so brute force attacks are back to requiring decades of computing power. The authentication algorithms that identify your device as authorized have also been strengthened to prevent spoofing and other attacks. WPA3 even encrypts data on public Wi-Fi networks – which means employees connecting at an airport or coffee shop on a network without a password can still have the security benefits of a private network.

The first step you can take is to make sure that all new PCs you purchase have Wi-Fi 6E radios built-in. Wi-Fi 6E devices are backwards compatible with today’s Wi-Fi networks, so you can continue using your legacy infrastructure while building up your installed base of 6E compatible devices.

The second step is to evaluate the bandwidth usage and congestion of your current wireless network. A managed services partner like Clare Computer Solutions can not only help with that assessment but can also evaluate other aspects of your network infrastructure like Virtual LAN segmentation and switching and routing to ensure your entire network is optimized for your business’ needs.

The final aspect is security. In addition to the increased encryption of Wi-Fi 6E, an infrastructure upgrade like this is an important time to review and update other network security elements like authentication and remote access. There are many layers to security, and you need to approach security holistically.